You are here: Home / Inspiration / Plugged-In

Develop a social and sustainable business model empowering your community (and beyond), using one of given topics.
Topic: 2. The business model is geared towards the fight against poverty by tackling societal problems such as education, health issues and food security.

The social business “Plugged-in” represents street artists in Lisbon from different backgrounds, playing different instruments and music styles. Through our organization, these artists can be booked for public or private events.

The service is directed at public and private groups or individuals. However, the social impact is created on the supply side of the project. Plugged-in is trying to help street musicians depend less on donations on the street and have a more regular and secured income. By having paid performances on a regular basis, their level of income can be enhanced and help crossing the poverty line. In addition to that, Plugged-in wants to build a positive image of street music within the local society. By increasing the acknowledgement of their talent, Plugged-in will not only help in building the artists’ self-confidence but also their acceptance in society.

On February 11th 2012 Plugged-in organized its first event in Lisbon.

By playing at “Ginginha do Carmo”, Yaw Tembe earned 50 euros in 90 minutes.

More than 50 people attended the event

With the first event Plugged-in reached over 1500 people on Facebook. Out of which 152 were talking about the event – Almost 10% of the 1500 were talking and sharing the event online. 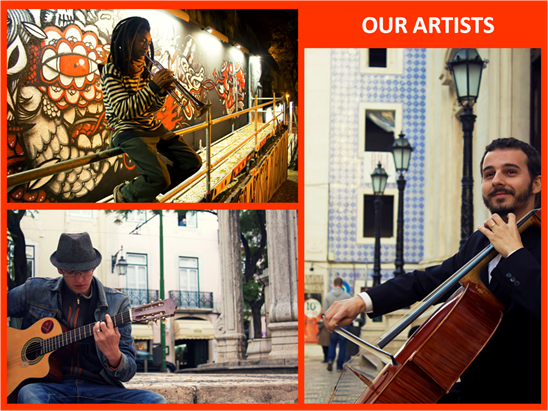 Ginginha do Carmo will have Yaw Tembe playing for the second time in less than 30 days.

Plugged-in and Nova Social Consulting Club will host an open event at Nova SBE in the beginning of May in order to raise awareness of the project and involve more people in our team.

The social impact is created by getting paid jobs for street artists on a regular basis. Hence, the key performance indicators which we would like to introduce in order to measure social impact are:

The number of jobs/gigs per artist per month,

The total number of gigs booked via our Plugged-in website

Number of artists engaged in the project per month

Viral reach of our Are you Plugged-in? Motto: measured by the number of online followers.

The number of partners (or clients) that book every month

Number of viewers and supporters of our Artists videos’

The monthly income generated by the artists through Plugged-in

The number of jobs and the respective income should be aiming to become high enough to cross the poverty line.

At this point we want to highlight that the goal is not to get the artists off the streets since we see this as a part of their identity and their way of expressing themselves (except in the case that this is their particular goal). In fact we aim to support them in transforming the street-begging-like situation in which they are currently positioned. We believe it is unstable, irregular, dependent on seasonal factors and insufficient to escape the poverty trap.

The business model in its most basic form consists of two entities besides Plugged-in and can be illustrated as follows:

The Plugged-in website is the major link between the artists and the booking clients. On the website, all the relevant information about the artists is displayed. Moreover, it is the medium for interested public or private groups or individuals to get in contact with Plugged-in, seek further information, and eventually book online an artist for their event.

This business model is sustainable as long as the following two main circumstances co-exist:

There are bars, restaurants, weddings, events, etc. looking for a live music performance at an affordable price and with a positive social impact.

We believe that both supply and demand are sufficient and constant in order for our business model to work out. 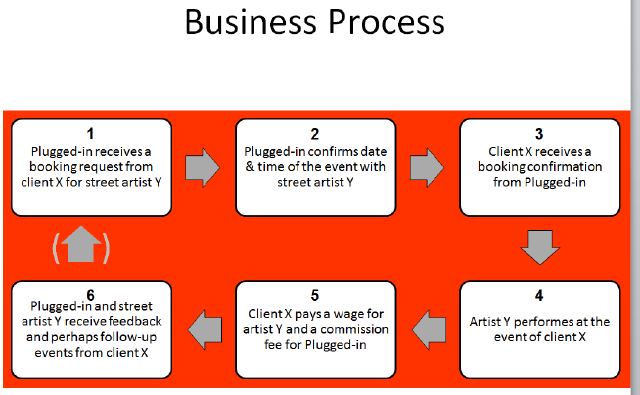 Inherent in this process is the financial sustainability of Plugged-in. The booking price paid by the client consists almost entirely of the artist’s wage. However, a certain percentage is taken as a commission to be reinvested in the organization. This way the business creates income and can cover costs as well as invest in the development of the business.

In general, the sustainability of Plugged-in’s model is built on a low-cost strategy supported by its low fixed costs and its online-based approach.

In the previous questions, the customer has been described as any public or private groups or individuals seeking for a special music live act for their event. In particular, these can be any form of music events in bars, restaurants, hotels, shopping malls, airports, metro stations, birthday parties, weddings and others. Our customers can have many different profiles, for instance it may be a bar that provides live music for their guests already for years. However, we might also promote new customers that have not yet considered live music in their venues, for instance hostel lobbies.

The benefits for our customers are as diverse as the following:

First of all, the booking of an artist is easy and fast because it is feasible online.

Furthermore, we can provide a lower price than other musicians or agencies due to the fact that our artists are not yet being commercialized.

Since Plugged-in intends to support the fight against poverty our customers have the opportunity to enhance their image by exposing themselves as socially-concerned entities.

They can also promote their venue within our Plugged-in network - In less than 7 days Plugged-in reached over 200 followers on Facebook and over 180 people were talking about it on internet-based social networks.

In comparison to the competition we provide a service to book live music acts easily and quicklyonline. The most important point of difference is that we provide street musicians services which not only bring a unique musical component to the customer’s venue or event, but also a social-mindedimage. 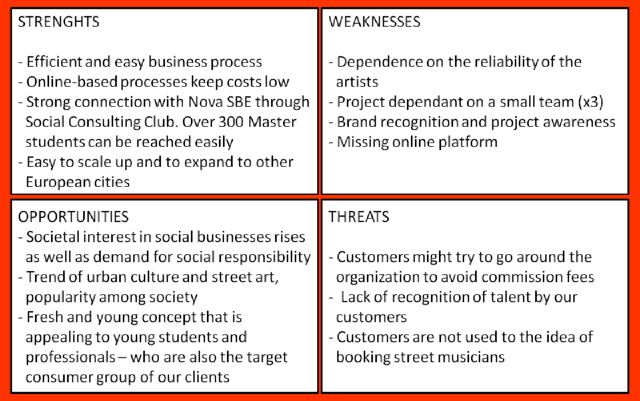 Facing the above-mentioned weaknesses and threats, we already took first steps in order to transform them into strengths and opportunities.

We are currently in contact with designers and web creators in order to secure a strong branding, corporate design and easy-to-navigate online platform. We believe that in connection with promotional activities, this can help us raise recognition of the talent of street musicians in society. The fact that customers are not used to the idea of booking street musicians will be the starting point for our unique selling point. By making the brand Plugged-in known and by communicating all the customer benefits to the customer, we are sure to turn this threat into one of our strengths. Having a strong connection to Nova SBE, we believe we can find new team members easily when needed.

One of the most difficult points is probably the dependence on the reliability of the artist. First of all, we plan to have several conversations with every new artist we involve in the project in order to learn about their background, character and personal dreams and problems. We believe that reliability can be trained and furthermore will grow with increasing success and booking of the artist. We think that as soon as they feel part of the project and feel the benefits we provide for them, they will also tend to not let the customer go around the organization.